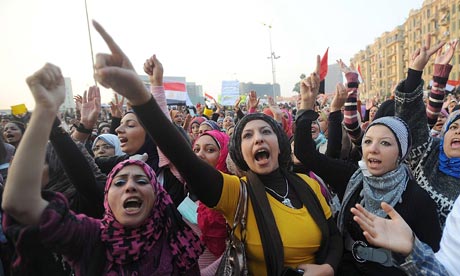 she checks my hijab for glimpses,

and says that we are to walk the streets with respect.

we are to buy groceries, not sell ourselves.

she pounds fruit for their secrets

and examines vegetables for their lies.

measures how we care for ourselves.

she chats with Tharwah about her business:

has it been nearly as faithful as she is?

“Allah will provide as long as i’m present.”

comes in many forms.  sometimes shopping,

in the hot sun under wood and cloth

with fruit that flirts with flies ~

here, this is women’s work.”

we stop by Jannah’s apartment

full of squalls and giggles and milk.

i sit, bored, with the entertainments

“habibti, we carry children in our wombs.

even when they emerge, we tie them to us,

near our hearts, with love and cloth and cords

to protect them with our warmth.”

she scalds me with her glare.

and for Allah to protect our steps

for the streets are angry and on fire.

“are you sure it’s okay for us to leave

our shopping here until our return?”

“may you be as safe as it will be, inshallah.”

we are near, now, to Tahrir Square

the four points of freedom

where police run and threaten.

a shoal of hijabs draws us near

when mama raises her fist and yells,

by the anger, the echoing bullets, smoke signaling

the crowd, so many people, so many more

than i knew earth could hold.

she leans near and takes my hand in hers.

as long as we are present for Him.”

aren’t the men supposed to protect us?”

the community, too.  men may turn each other

into candles to burn up thoughts of freedom,

but women flowered this uprising.

for them and for us,

we must be present for its bloom.” 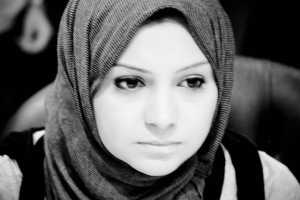 * Note 1: Egyptian activist Asmaa Mahfouz posted a video online urging people to protest the “corrupt government” of Hosni Mubarak by rallying in Tahrir Square on January 25. Her moving call ultimately helped inspire Egypt’s uprising. “I, a girl, am going down to Tahrir Square, and I will stand alone. And I’ll hold up a banner. Perhaps people will show some honor,” Mahfouz said. “Don’t think you can be safe anymore. None of us are. Come down with us and demand your rights, my rights, your family’s rights. I am going down on January 25th and will say no to corruption, no to this regime.” 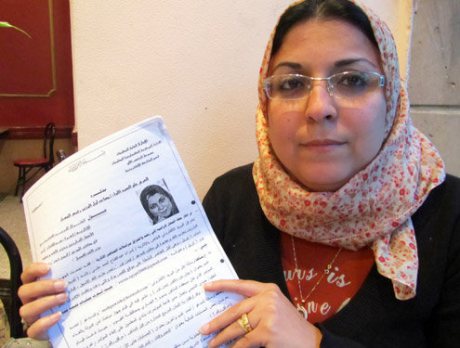 ** Note 2: Long before the Arab Spring, a young Egyptian woman named Israa Abdel-Fattah organized the first Facebook-generated general strike in Egypt in 2008. Abdel-Fattah, dubbed Facebook Girl, called for a peaceful strike in support of workers in the industrial town of El-Mahalta El-Kubra. She also called the strike to protest a myriad of social ills, including police torture, fabricated criminal charges against innocent people, unfair wages and a corrupt judiciary. From her courageous post, she became a symbol of resistance against political corruption and injustice.

Abdel-Fattah co-founded the April 6 Youth Movement and then created a page on Facebook, calling for a general strike on April 6, 2008. The news spread like wildfire and on what would normally be a busy workday in Cairo was anything but, leading the New York Times to write, “The eerie emptiness of the normally teeming streets of Cairo signaled the depth of discontent with President Hosni Mubarak’s government.” A few days later, Egyptian security forces arrested her and detained her for two weeks.

The Youth Movement grew into a popular political party. Abdel-Fattah reappeared again this year during the January protests in Egypt. She was active on the Internet, and also on the ground, updating Al Jazeera TV with the latest news related to the opposition.