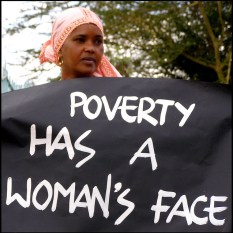 When I think of spring I think of a time for rebirth. A time for seeding crops and clearing fields. I enjoy planting bulbs that will bring colorful flowers in the sunny days to come. For many around the world that life would be a fantasy. It is hard to imagine that 840 million persons in this world are undernourished and suffering from a lack of food. Over 70% of these are women and girls. While many this time of year plant gardens and plan for spring break and upcoming proms and weddings, other females in many countries and communities around the world women and girls still struggle and forage for food. Bread for the World claims each year due to poverty and disasters, 37 million people require services at emergency feeding stations worldwide. 15 million of these people are fleeing from war. 2 billion people worldwide cannot read in any language. Thousands of children die everyday from malnutrition. That’s startling.

The cycle of world poverty and hunger does not stop at American shores. At the present, World Church Service reports one in five Americans are born into poverty. The minimum wage has not been increased in more than 10 years, while the out sourcing of living wage jobs for the American people continues to grow. Production work and many other forms of employment pass out of our borders. Exploitation of workers in developing nations has become a major factor in the loss of employment for the American worker. It is causing poverty in our own nation. Decent paying jobs are harder and harder to find.

Many factory workers outside the United States make as little as $1.50 a day. In this system multinational corporations make billions at the expense of the world’s poorest. Meanwhile, more and more Americans are finding it hard to make ends meet as well. This takes place while the out sourcing of jobs and expansion of overseas sweat shop labor continues. It is a vicious cycle. The majority of workers in sweat shops are women and children who live in the severest of poverty conditions.

This exploitation by the corporate world is one of the major causes of our own economic ruin but, we the American people can turn the tide. It is time for us to demand change and contribute as little as we can to this unfair, unjust system. Our materialism is our weakness and it is time we started living smarter and spending less. Here are a few suggestions that can really make a difference. Stop buying clothes and products made outside the United States. To do so is only contributing to an exploitative system and making the whole economy pay off for the major corporations. If you are going to buy an import check to see if it is a fair trade product. Look for products with the union-made US symbol or buy second-hand.