I never pictured myself wedding-planning. It never occurred to me that I might find someone I liked enough or had open enough communication with that I would want to make such a commitment. I never leafed through bridal magazines or designated my middle-school friends as future bridesmaids, and you would be hard pressed to find me trying on white prom gowns. 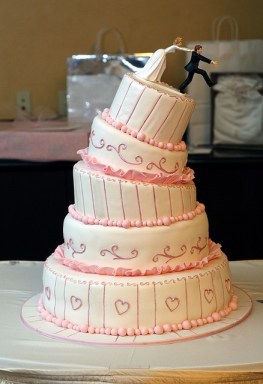 I was a self-proclaimed activist in high-school, I was head of the Peace Club and the Gay-Straight-Alliance, and my locker was plastered with PETA stickers. I was a Women’s Studies major in undergraduate and gradate school, and was never really around any group of people who deeply believed in, or had had particularly good examples of marriages. This lack positive information associated with the institution coupled with the fact that the ceremonies and traditions are steeped in a tangled-up mess of a history (ownership of women, virgin purity, etc) quelled any urge I might have had to get married. Let alone the fact that I identify as bi-sexual.

Maybe it’s better to say that I self-identify as bisexual – I tend not to identify my sexuality publicly. For the most part, I never have to. When you are a twenty-something year old engaged to a handsome young man, people tend to assume you are straight. What could be more hetero-normative than getting married? And what opportunity would I have to set the record straight (bi)? When we cut the cake? When we are asking both sides of the family for money? Should I write that into our vows?

I don’t think my future in-laws would react in a negative way necessarily, but I don’t feel comfortable outing myself during the engagement – it feels like it would come across as a litmus test for them. They might feel put-upon to react in a certain way, and I would feel aggressive bringing it up. As we get deeper and deeper into planning this very, very expensive party, I can’t help but feel like any opportunities I might have to be open and honest are waning.

So how can you be your whole self? I ask less as a plea for advice, and more as an open question. What happens to my whole self when I actively disallow for open conversation about my sexuality? My fiancé is white, middle-class, and both of his parents were educated to be religious leaders. I have been upwardly mobile in my life so far, being raised poor, having a brush with homelessness in high school, and then attaining a Master’s degree and middle-class job. The class differences between our in-laws could cause a tense situation, as could my feminist beliefs. We all get along for the most part, but balancing our differences can be exhausting during the wedding planning process. There is no time or energy left to have a conversation about how I do or do not sexually identify.