Okay, personally, I hadn’t given much thought to the legalization of Mixed Martial Arts (MMA) in New York State.  What does that have to do with me? I am not going to watch it. I am not going to let my three boys participate in it any more than I would allow them to participate in boxing or football. Call me overprotective, whatever.  MMA would be an economic boon to the economy I hear.  God knows the City of Albany could use a boost.   Some even say MMA is good for kids. At least that’s what Albany County District Attorney David Soares says in today’s Times Union where he came out in support:

“From football to step-dancing, motocross to skateboarding, and boxing to kickball, we are creating spaces and places for children to be safe.”

Something about that statement just doesn’t ring true. While MMA might bear some resemblance to boxing, I just can’t see comparing it to  step-dancing and kickball.  Mind you, I grew up watching boxing with my grandfather, so it’s not like I have a general reaction to violent sports overall.  Call it splitting hairs if you want, but there is something about the idea of putting people in a cage and letting them just go at each other no holds barred that seems downright barbaric.  I can’t help thinking about cock-fights–oh, but those are illegal.
In my search for more information, like any good internet junkie, I did a google search on MMA in New York, and I talked to a guy from a group opposing it called United Here. Come to find out, the National Center on Domestic and Sexual Violence submitted a letter to NYS Assembly Speaker Sheldon Silver over the signatures of multiple organizations including the NYS Coalition Against Sexual Assault, the NYS Coalition Against Domestic Violence, the National Organization of Women (NOW)-NY, and End Violence Against Women International (EVAWI), the Arab American Family Support Center, the National Organization of Men Against Sexism, and Girls for Gender Equity opposing the legalization of MMA.  See the letter here.

“Why, in a state that just enacted tough new legislation addressing the epidemic of domestic assault, would we reverse course and expose our children to the violent misogyny and perverse forms of masculinity that are celebrated in the world of amateur and professional cage fighting?”-–from the National Center on Domestic and Sexual Violence letter to Speaker Silver

The gist of the letter focuses on the “irresponsible” behavior of the participants (to get a better sense of what irresponsible behavior looks like just google “MMA and sexual assault”) and the carelessness and outright misogyny of the company that dominates the industry, the Ultimate Fighting Championship (UFC), but it falls short of making a direct connection to increased sexual assaults and incidents of domestic violence.  The UFC responded to the letter and you can read that response here.
While I think of myself as a big, bad feminist, I don’t find the letter from the sexual assault and domestic violence advocates (peace, my sisters:)) entirely convincing. The real turning point for my own thinking about MMA came when I read this fact sheet: CageFighting-MMA-FactSheet(In all fairness, the fact sheet came from the above-noted anti-MMA folks, Unite Here).

The fact sheet hits  on a series of five points with detailed information to support them. The gist of it is here:

The most compelling argument to me against MMA is that it is simply not a sport. It’s a legal (in most states) way for people to beat the crap out of (and sometimes kill) each other.  Combatants are allowed to kick each other in the head,  use elbows, knees, hands to injure one another.  Choke holds are also permitted. Fighters are often “caged”–I know you have seen this on TV.     If you read exactly what MMA entails in the fact sheet, do you think it’s good for your kids? To quote a friend,

“Soares is wrong to compare it to judo or karate, just because it’s in the name. It is athletic, to be sure, but it is athletic activity devoid of honor, principle or restraint. Unless he thinks MMA is an innovative approach to getting guns off the street, ‘hey, let’s just teach our young people how to kill using only their bodies!'”

Bottom line? It’s a brutal, barbaric form of  “entertainment” whose legalization is being pushed by companies and people who are positioned to make a lot of money off of making it legal. Check out the increase from 2008 to 2012 in campaign contributions by the Zuffa LLC, the firm that operates the UFC franchise. (Thanks to Capitol Confidential, http://blog.timesunion.com/capitol/archives/179402/ufc-battles-for-permission-increases-contributions/)

What do you think? Should Mixed Martial Arts be legal in NY?

Two of our local representatives, Assemblyman John McDonald(108th) and Assembly woman, Patricia Fahy (109th)/both stated back in February that they are “open” to MMA. I don’t know if their positions have since changed, but I am sure they’d like to hear what you think.

Whatever your position on MMA, come on out on Tuesday, April 23rd from 11am-1pm on the West Capitol Park steps to Support Survivors of Sexual
Violence and Abuse with the  NYS Coalition Against Sexual Assault and others. 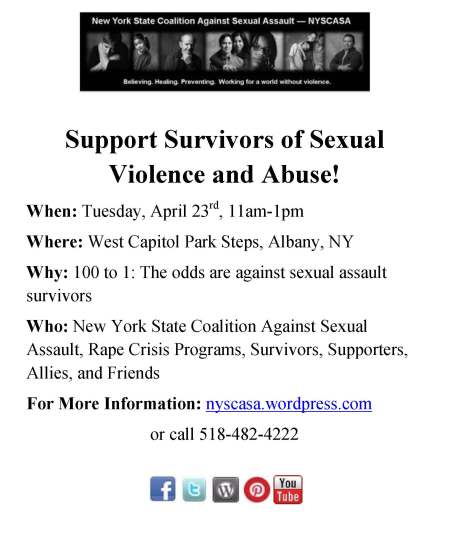