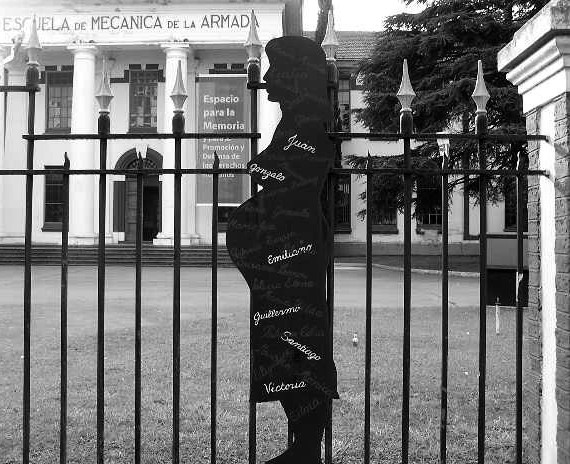 The 16 Days of Activism Against Gender Violence symbolically link the multiple forms of violence that women around the world experience (November 25) with the question of human rights (December 10). In Argentina, my country of origin, the specter of human rights abuses has particular connotations, reminding of a time in which a military dictatorship (1976-1983) systematically violated the human rights of the population. In the name of “national security” and “Western and Christian civilization” in a Cold War context, the military regime kidnapped, tortured, and disappeared on a massive scale people catalogued as “subversive.” The blanket term “subversive” was broad and ambiguous enough to include members of guerrilla organizations as well as people with leftist leanings more generally, those doing social justice work, individuals with dissident political and cultural viewpoints, and family and friends of people already targeted. People from all walks of life populated hundreds of clandestine detention centers disseminated around the country: labor organizers, students, artists, journalists, activists, clergy, workers, professionals, educators, and many others. Both men and women experienced horrific treatment in these torture centers, and most were killed at the hands of state armed forces, which customarily denied such occurrences—thus the concept of “disappearance.” These actions are paradigmatic of state terrorism.

In occasion of the 16 Days of Activism, I would like to call attention to the specific forms of violence that women in clandestine detention centers suffered. A silhouette of a pregnant woman in front of the ESMA (Escuela de Mecánica de la Armada/ School of Naval Mechanics) reminds us of the gendered torments that women underwent. The ESMA is perhaps the most emblematic, but not the only, clandestine site where pregnant women were killed after they gave birth and had their children taken away. It is estimated that around 500 children were appropriated in this way, having their true identities changed and given to families connected to the state armed forces. Testimonies of survivors narrate cases of pregnant women who were beaten, tortured, and held in deplorable conditions or compelled to have an abortion without anesthesia. Women in general suffered various types of sexualized torture, sexual harassment, forced nudity, and rape. Not surprisingly the repertoires of gender violence that had already operated outside detention centers were applied in captivity as well as adapted with twisted “creativity.” The difficulty to talk about these issues and hold perpetrators accountable for these crimes speaks to the connecting threads between past and present forms of gender violence, in dictatorship and in democracy, at the hands of private individuals or sponsored by the state. In Argentina, the tireless work of human rights organizations and the women’s movement has helped to raise awareness of these crimes and make some inroads in setting legal and cultural frameworks that more broadly recognize that “women’s rights are human rights.”