Over the course of the past few months I started wondering why it seems that sexism has taken a step in the wrong direction in recent years. Why does it seem that women are spending way too much time and money trying to look good and attract men, and men are taking women less seriously? I don’t remember women being as sexualized when I was growing up, and I couldn’t tell if it was because I didn’t register sexual thoughts when I was young, or if there is actually a difference. Then I started to wonder if there was a correlation between the over-sexualization of women and the rape-culture in America. Was this just something that was happening with public figures, or was it trickling down into the rest of the population? One chart-topping hit song that came out this summer made, in my eyes, a definitive connection between the two, and sadly was celebrated by the masses. 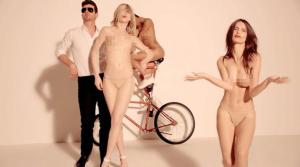 Earlier this year a relatively new artist named Robin Thicke came out with a song called “Blurred Lines”. The first time I heard this song I was really excited. The beat was extremely catchy, I liked the way he sang in a high-pitched and playful sort of way, but after only a few seconds of listening to the lyrics I abruptly turned off my radio and said to myself “this song is just plain awful.” I never gave it a second thought, I had just decided that it was a terrible message to send out, and I wasn’t going to support it, even though it was probably the most fun dance song on the radio. A few days later I started noticing my facebook feed flooding with articles about how sexist and awful the song was, how Robin Thicke is a jerk who is perpetuating rape culture in America, and others about how it’s totally fine and people just need to chill out. I put my nose deeper into the subject and found my own conclusions.

The song, at the very least, without taking any of the lyrics out of context and spinning them to be about actual rape, is a song about trying to persuade a woman into sexual acts that she’s not comfortable with. It’s implied that the woman in the song has said “no” to an advance, and now the singer is trying to convince her that it’s alright to do what he wants with arguments such as “That man is not your maker ”, “I know you want it, but you’re a good girl”, and “I hate these blurred lines”. From my perspective, there is no such thing as a blurred line. If a person says no to a suggested sexual act, or a sexual advance, or taking a relationship to a level they’re not comfortable with, then it’s a no. Peer pressuring someone into doing something they’re not comfortable with is unacceptable, and it ends up being victim-blaming when the person who was pressured regrets what happened. This is the kind of situation where the perpetrator of the advance can throw their hands up and say “she wanted it”, and somehow it becomes the woman’s fault. There is one key ingredient missing in this whole equation: responsibility. 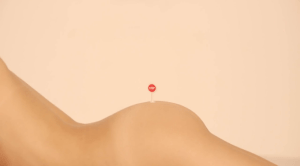 This entire song is about Robin Thicke not taking responsibility for his actions. If the woman in the song ends up sleeping with him, even though he’s been using peer pressure to get what he wants this whole time, well, he knew she wanted it. This is the kind of thinking that strongly perpetuates sexism and rape. It gives men a free card to be overly pushy with women who have said no. It makes women into lesser beings that can be easily manipulated and taken advantage of. Plus, to top it all off, the music video for the song depicts women in the nude performing taboo sexual acts while the men in the video are completely clothed. It takes sexism to a whole new level, turning women into animals that are at the disposal of men, that have no free thought and will do whatever a man tells them. It’s clearly a bad message to be sending out to the masses, and to my surprise, it made it to and held the #1 spot on the Billboard Music Charts for 16 straight weeks. This made me start thinking that nobody in America takes this sort of negative message seriously. Nobody thought that this song was worth not listening to, or to the next extreme that it was the best thing that ever happened to radio.

I’ll let you decide if this is a great message to be sending. Here are words from Robin Thicke’s own mouth about this subject:

“We tried to do everything that was taboo. Bestiality, drug injections, and everything that is completely derogatory towards women. Because all three of us are happily married with children, we were like, ‘we’re the perfect guys to make fun of this’.”

“People say. ‘Hey, do you think this is degrading to women?’ I’m like, Of course it is. What a pleasure it is to degrade a woman. I’ve never gotten to do that before.”

“It’s actually a feminist movement in itself.”

(For more excellent quotes by this genius, check out http://www.gigwise.com/photos/85781/01/blurred-lines—robin-thickes-10-most-creepiest-sleaziest-quotes  ) 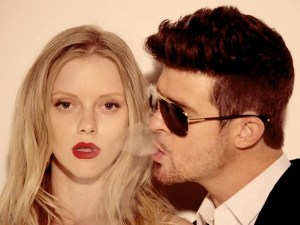 In my opinion, there is definitely a correlation between famous, well-known and highly celebrated pop stars sending out terrible messages that degrade women, and the normalization of sexism in our society. If all you see when you watch television is women wearing no clothing, falling all over one or two completely dressed men, then how could you expect to take women seriously? Celebrities like Robin Thicke are sending out negative messages that they know will generate publicity and money, and not thinking or caring about what kind of a consequence it will have on the population, or how it can be a joke to them but seriously change the perspective some people have of women. People, especially public figures, need to start taking their messages seriously, they need to think about what they’re saying and how it’s perceived by their fans, and put more of an effort into making the message positive. We as consumers need to start speaking out when there is a negative message being sent out, stop feeding our money into a system that promotes sexism and ignorance and start embracing new ways of thinking. We need to take a stand when we hear such messages, instead of accepting it just because it’s popular and so many others are following the trend. I think there’s another term for that. Oh yeah, we all need to start taking responsibility for our actions, so that we can see a change for the better.