Hunger and Human Rights: Budget Cutbacks as Violence against Women 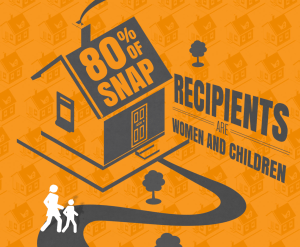 The 16 Days of Activism Against Gender Violence—a call to action to raise awareness of the multi-faceted forms of violence women face in the context of  human rights—ends today on International Human Rights Day.  As I reflect on today and this movement, my thoughts are serendipitously interrupted by the news headlines about Congress taking up legislation this week to make deeper cuts to SNAP benefits (formerly food stamps). These intersecting thoughts are not coincidental as I think about how access to food is a most basic human right and also how women are at the center of this ongoing assault on SNAP (Supplemental Nutrition Assistance Program) in Washington.

Food is our most basic need as human beings. Access to food directly impacts our social and emotional well-being, physical and mental health, and our overall potential in life. These connections are grounded in research and as a result we have policy (like SNAP) to ensure access to food. Yet sometimes when we hear the phrase “food security” used as policy-speak, we lose sight of the fact that food is a human right.

The harsh reality is that, across the U.S., 1 in 6 people (over 50 million) are food insecure and, as such, are having their human rights routinely violated. Food insecurity means that these families do not have access to enough food for all household members to live an active, healthy lifestyle. Over 2.8 million New Yorkers, including nearly 925,000 children, are food insecure. The reality for these families is tradeoffs between paying for basic needs, like rent and utilities, and buying nutritionally adequate food.

Existing hunger compounded with cuts to anti-hunger programs like SNAP, makes food insecurity one of the grossest human rights violations occurring across our nation today.  Budget cutbacks that further discrimination in access to food and resources is a direct violation of human rights law. Yet, our representatives in Washington—amid the worst poverty levels in two decades—are currently using our most significant investment to protect food security as a bargaining chip in budget cutback negotiations.

These proposed cuts are not the first assault on SNAP.  In November, all SNAP recipients (47 million people) across the nation saw a decrease in their benefits because Congress failed to act to extend the law passed in 2009 that provided a temporarily boost to SNAP benefits while the economy was recovering. As a result of Congress’ failure to act – 3,185,000 people in New York State alone lost access to over 135 million meals.

The assault of SNAP demonstrates our government’s blatant disregard of the fact that everyday millions of people are being deprived of one of their most basic needs. Our government’s obvious negligence to protect our access to food for the individuals who need it most is an example of the systematic ways our current system is further harming hungry Americans. Each budget cut that perpetuates food insecurity is a form of structural violence. Structural violence refers to systematic ways in which political and social structures deprive, harm or otherwise disadvantage individuals. An attack on one of our most impactful anti-hunger programs is a systemic and violent assault on the millions of people who are living in and near poverty, and struggling with unemployment, underemployment, and low wages.

Who is at the center of this structural violence? Women are disproportionately impacted by these cuts, as 80% of SNAP recipients are women and children. As child bearers, caregivers, heads of households, women are central to food access. Given women’s disproportionately low economic status, it is not surprising that women are most vulnerable to food insecurity. However, the effects of food insecurity are exacerbated in terms of its impact on women’s health, nutrition and behavior. Food insecurity is associated with obesity, anxiety, depressive symptoms, risky sexual behavior, poor coping strategies, and negative pregnancy outcomes in women. These connections exemplify how the intersection of gender with existing socioeconomic conditions create and perpetuate structural inequalities that are especially harmful for women. This clearly illustrates how we are not calling out food insecurity for what it really is– violence against women. Lack of data on food insecure women, victim blaming and prejudice against food stamp recipients further perpetuates the “invisibility” of this structural and political violence on women.

Today, as we raise awareness of human rights and violence against women– stand in solidarity with those millions of women across our nation who are forced to decide between a healthy meal and paying bills or who skips meals to make sure their children don’t go to bed hungry. I am asking my fellow activist and advocates to hold our government accountable for food insecurity. The lives of our women and children are up for negotiation in budget cutbacks. Carrying out any cut to SNAP is not only economically and morally unsound—it is a blatant violation of human rights and an act of gendered structural violence.

Enough is enough. The time for action is now. Negotiations of budget cuts are expected to happen this week. The Senate passed a bill in June mandating $4 billion in cuts over 10 years; the House version, passed in September, imposes nearly $40 billion in reductions. A conference committee has been charged with resolving these differences. These proposed cuts mean hundreds of thousands will lose on average $90 each month, and millions will be dropped from the program losing SNAP benefits completely.

Take action on behalf of the 3.16 million New Yorkers that depend on SNAP benefits to put food on their tables. New York State (NYS) cannot endure cuts to food assistance when more than 990,000 individuals are still eligible for SNAP and not receiving benefits. Statewide, 2.3 million residents rely on emergency food assistance (ie. food pantries, soup kitchens) annually. Meanwhile, funding for government programs that support emergency food programs has also fallen victim to budget cutbacks.  Already overwhelmed emergency food programs were especially hit hard when SNAP benefits were decreased in November. These overstressed programs have already needed to respond to the increased need in their communities as a result of SNAP cuts.

Contact your Member of Congress and President Obama today.  Our nation’s most critical anti-hunger program must be protected from budget cutbacks. In honor of International Human Rights Day relay the message loud and clear to our government. In the United States, the human rights of over 50 million food-insecure people are routinely violated. In New York, food insecurity is a reality for 1 in 6 people, including 1 in 4 children, across the state.  Any cut that further limits anyone’s access to food is blatant disregard for human rights and an act of political violence. Join the efforts of advocates across the nation fighting to defend SNAP and access to food.

Take part in these advocacy campaigns acts now and also raise awareness about cuts to SNAP: 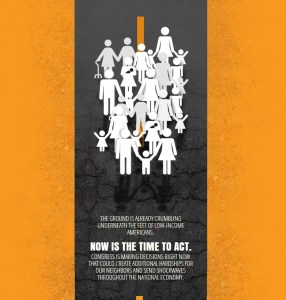