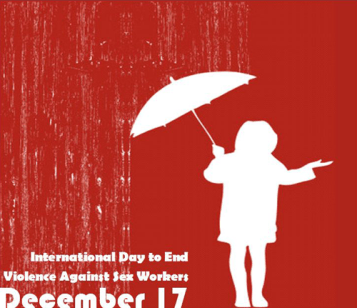 December 17th, International Day to End Violence Against Sex Workers, was created to address the ubiquity of crimes against this marginalized population that too often go ignored. Following the statements by the “Green River Killer” in Seattle, Washington, who claimed to have chosen sex workers as his target because he knew too few people would care, it has become apparent that this oft-neglected issue is in dire need of more attention and allies. As a sex workers’ rights activist, I have noticed even the most progressive of individuals hesitating to support this cause, generally for two main reasons: the fear of being labeled as a sex worker or patron themselves, and the subsequent stigma; and the idea that there’s very little a person can do to help when they are in no way part of the industry. As feminism has taught us, however, small steps and the inclusion of people from all backgrounds aren’t just helpful; they’re needed. So what can you to do to help end violence against sex workers? Below are a few steps everyone can take.

I can’t tell you how many individuals I have spoken with about this issue, most often upper middle class, heterosexual white men, who have told me the sex worker is setting herself up to be beaten up or worse by working. Even more troubling was that more than one of these friends had previously admitted to buying services from a sex worker in the past, while trying to convince me that men only patronize them to lash out violently.

I think a next project the sex workers rights campaign needs to undertake is a reframing of the image of the john (see: http://holdingourownonline.org/2013/11/22/reimagining-the-john/). Often enough, he is far from a monster; when he is, it is an anomaly that needs to be corrected. It is not the sex worker’s fault, but his own, and yours for allowing violence to be normalized.

Note: I told many of these men that if they cared about women’s safety as much as they claimed (often rooted in nothing more or less than a white knight complex) they perhaps could participate in some of these anti-violence measures. None accepted.

I don’t just mean direct slut-shaming. So many individuals who are really quite progressive let the word ‘whore’ slide as pejorative without flinching, whereas you’d raise a fist should any other epithet be said in your presence. “It wasn’t said in context of sexuality,” you might say but that closely echoes the disturbing claim I’ve heard that racial slurs aren’t always related to skin color or culture, but character. The next time you hear these words thrown out as something negative or meant to be hurtful, even playfully so, show the same anger you demonstrate for every other cause. We need you.

My relationship to this industry is a complicated one. Through outreach I have interacted with both lower income women of color working in brothels in Queens and models sipping champagne while earning four figures an hour. There are a number of things I think can be appreciated about facets of the industry (sometimes making one’s own hours, or not having a manager) but an overwhelmingly larger amount that bring me to the verge of breakdown just thinking about.

Do I still think it should be decriminalized? Absolutely. If one has enough information to form a valid stance on the issue of legality, they would know that this would bring far greater independence to workers as well as a safe working environment in which sexual and non-sexual violence were lesser threats. Should one be a victim of such a crime, they could even report it to the police without fear of revictimization. Trafficking victims too could speak out without fear of arrest—oh yes, that happens, even with children, though as of a few years ago their records may be cleared after long judicial processes.

If you think the selling of sex is problematic, I may be able to see where you’re coming from. If you’re against decriminalization, you’re of no more help than the police officer rapist.

4. Stop the call for a return to modesty.

A quick look at my Facebook newsfeed and I see that one woman posted about how we shouldn’t wear so much makeup, and another posting of how women shouldn’t post such provocative photos. “You shouldn’t resort to such cheap ways to attract a man.” Aside from the problem of jumping to such a conclusion as to why a woman may take such actions, one must question why the shunning of this attraction falls upon the woman. To say that men cannot control themselves, or that women should fear their sexuality rather than embrace it is to staunchly advocate rape culture. If you wish to be valued for more than your sexuality I applaud that—with the caveat that you don’t make a hobby of policing everyone else’s.

This is something I have neglected, as can be seen in my words up through here, and am going to make a personal goal of overcoming. The sex industry, like most other industries, is a vast one which few will ever explore all the facets of. It isn’t just cis-female workers and cis-male clients. In fact, the highest risk group for violence is trans women of color. We often see caricatures of the sex worker in the media, from the wealthy blond woman to the streetwalker, failing to pay attention to the many individuals in between (perhaps because it frightens some to think that the sex worker is often just as normal an individual as him or herself.) Gender of the sex worker, too, displays itself in this gray area, all the way to the end of the spectrum where lies the cis-male sex worker; all of which are underrepresented in the majority of understandings of the industry. Perhaps this is because of the same tendency we see time and time again of portraying women and only women as victims of sexuality; another example of this would be state rape laws, many of which define first degree rape as only that occurring between a male perpetrator and female victim.

More than ever sex workers are keeping blogs, making magazines, and expressing themselves in the arts. Take a peek sometime! It’s a great turning from the exploitative mainstream and will let you see how these individuals define their own experiences rather than having them defined by others. For more information: redupnyc.org

Self-violence is another issue sex workers’ face and this could easily be avoided with support from our loved ones. I’m not sure where I would be without a small group of friends to open up to completely and talk freely of my choices. For most people in the sex industry, however, this isn’t an option. It’s a very lonely place. Bring up sex work in conversation and you might be surprised by how many people open up and say “oh, I did that once.” And their being able to say that to you might be enough to make their day. The personal is political- and sex workers rights are women’s rights, LGBTQ rights— and human rights.