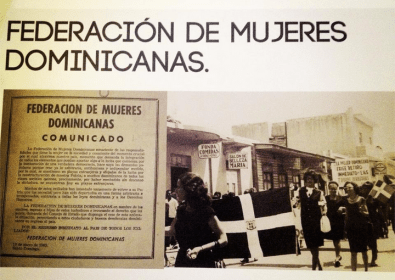 Over the course of my fifteen-day community service trip in the Dominican Republic, a recurring theme was the insistence that women take special precautions due to the country’s gender dynamics. “When two women are dancing together in the club,” we were told, “it means they are asking for a man to come take them.” Similarly, we were warned not to ever accept a drink from a man, because in the Dominican Republic, this served as a guarantee that the woman involved would be going home with the man. In our Spanish classes we also learned that we would be hearing many come-ons from the local men, with the reasoning that this too is part of “Dominican culture.” “It isn’t harassment, exactly, because they won’t touch you,” one of the teachers said. “They just say those things because they have to. Don’t take it personally or be offended.”

While I appreciated the advice and information, wanting to be aware of cultural customs, what to expect, and how to act appropriately, I have trouble accepting these phenomena as “the way it is.” Not too long ago in the United States, a woman who failed to heed the aforementioned advice too would be labeled as having “asked for it.” This has certainly not been entirely remedied, yet it is an ideology many of us have been staunchly combating, knowing that if gender roles are socially learned that can be unlearned as well. The “boys will be boys” attitude fails to take into consideration a wide array of causes and potential remedies of heteronormativity and rape culture that have nothing to do with biology—and certainly are not restricted to the Dominican Republic.

With this in mind, what was particularly striking to me was the manner in which the other volunteers reacted to this information. Unconsciously clinging on to imperialist notions of “First World” honorability and “Third World” savagery, there were many instances in which people expressed shock, pity, or other negative emotions regarding how far behind the people of the Dominican Republic are socially, while failing to draw parallels between the dynamics witnessed there and those that can be found within every region of the United States. While unwanted come-ons are legally classified as harassment if taking place in work or school, they are not in any other location. Women are still criticized and questioned in instances of assault, be it regarding their drinking habits, sexual history, clothing, or any other insignificant detail used in attempt to justify violence.

At another point, a fellow volunteer commented on how sad it is that in the Dominican Republic some women turn to sex work to make ends meet; yet US women too turn to sex work, sometimes out of choice but other times out of circumstance or coercion. What is any more devastating or a cultural statement about a Dominican women in this situation than a low-income woman of color in the United States, or for that matter, someone other than the cis-woman?

If one were to describe the issues women or any marginalized population face in the United States, but attribute them to a developing country instead, these issues would immediately be seen as a cultural phenomenon, or a statement of the nation as a whole; when discussed as instances which do indeed happen in our own country, however, problems are most often viewed as pathological and characteristic of the individuals directly affected rather than the larger framework through which we all operate. Another key example of contemporary portrayals of women’s issues across the globe would be violence against women: what we refer to as the cultural problem of “honor killings” in the Middle East are seen as only problems between individuals in the United States, though these “crimes of passion” occur here at a higher rate.

This is not to say that the oppressions against women in the Dominican Republic or anywhere else are not worth addressing, or that their culture has no significance when examining the aforementioned issues. Rather, one must adopt a transnational lens when analyzing social problems, embracing both similarities and differences of these issues between various cultures; understanding that national boundaries and history often do play some role in cultural dynamics but are hardly the sole factor; and understanding that the United States is as much a locality as any other region, rather than an example by which all other countries should be measured.

This holds true for positive examples of social change as well. While the Dominican Republic has a rich history of feminist leaders at the forefront of their political efforts, such as the Hermanas Mirabal who initiated the protest over their dictator in the mid-twentieth century, what we in the United States know as feminism may go by other names, if any at all, and exist in forms we do not recognize. What is sometimes referred to as hegemonic or second-wave feminism describes a very limited number and type of aims as necessary for the advancement of women; multicultural and third wave feminists, however, have stepped in to affirm that this is hardly the case. While abortion access may be the primary concern for some, forced sterilization and the right to bear children in the first place are issues more pressing to others.

Outside of Santo Domingo and the other metropolitan areas of the DR there may not be a visible “feminist movement,” or people who identify as feminist, yet it was nonetheless apparent in the rural areas I traveled to that acts some may take for granted—such as women of a family coming together to help with child-raising—were nothing short of powerful forms of activism for the advancement of women. Feminism is both needed and present across the globe, and will only thrive when we recognize how its settings and manifestations can be beautifully different.