In an effort to give Holding Our Own’s network members an opportunity to get to know each other just a little better, we will be spotlighting a couple of our members each month. We hope that this will help provide you with more opportunities to connect, collaborate and leverage your resources. Do you want to be next, or know of anyone you would like to see featured? Email hoo@holdingourownonline.org and we will set up an interview. We hope everyone will participate at some point. 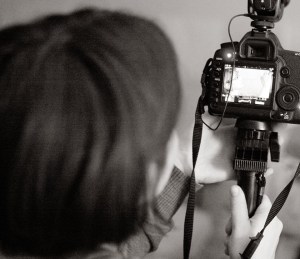 Victoria Kereszi is a Pennsylvanian born filmmaker, wife, mother, feminist and activist.  Now living in Troy, NY, she works for Workforce Development Institute, as well as with The Sanctuary for Independent Media, doing film and writing workshops for marginalized communities, as well as completing a documentary about midwifery, natural birth, and the power of motherhood.  Clearly a busy woman, Victoria is constantly exercising her feminist beliefs.  After obtaining an undergraduate Women’s Studies degree, studying film at NYU, and becoming a mother, Victoria’s definition of feminism has changed over the years.  Since she has had many opportunities to work with different communities of women, all of varying ages, races, and gender identities, Victoria no longer sticks her feminism into a single category, because she recognizes how individualized women’s personal and cultural needs are.

Victoria describes feminism as “battling oppression by adding women, and those who identify as women, into the spaces of patriarchy that have typically ignored [them], like film, literature, and history, and even in science and health fields.”

She believes that in order to get women into these cultural spaces, people need to give these women the tools they need to tell their stories, themselves, by teaching skills in media, writing, art, communication and leadership, so they can share what is happening to them and their communities.  At the Workforce Development Institute, she is in charge of the cultural programming and also runs the art of labor program, where they do photography and writing workshops with women from disenfranchised communities.  Here, she did a program with female veterans where they took photos and wrote about their lives weekly and the results were displayed at The Sanctuary.  The result was a beautiful display of artwork, and a proud group of women who felt empowered by seeing their work, hanging on walls, being recognized by others.

Victoria’s most passionate area of interest (at least currently), though, is about birth and motherhood.  Having led a natural birth documentary series program at The Sanctuary, highlighting feminist midwives like Ina May Gaskin and Ibu Robin Lim, Victoria merely brushed the surface of her mission to share women’s stories and to empower.  Victoria stresses how powerfully motherhood impacted her definition of feminism.  After being referred to a midwife by a friend, experiencing both home care and hospital care, and learning about the benefits of natural birth, she saw the power in women claiming their motherhood, and owning the ways they choose to both give birth and to mother.  Giving birth has become an event during which the pregnant woman is given less and less control because of the patriarchal nature of institutionalized medicine.  There is an assumption that “whatever the doctor says, goes,” but this needs to change, and Victoria is committed to accelerating the process.  It is a woman’s right to choose how and where she gives birth.  Victoria thinks this is one of the most important practices of feminism: having the choice to give birth and mother the way you want to.

After her experience with her midwife, Michelle, Victoria wanted to share her with the world by making a short film about her.  But what was supposed to be a brief film about the portrait of a midwife and a family having their second child, quickly turned into something much more.  At the midpoint of the seemingly perfect pregnancy, the expecting mother, Rebecca had a routine ultrasound and everything changed.  They discovered their baby not only had Down Syndrome, but also had three major, inoperable heart defects.  Rebecca was given a short weekend to decide the fate of her unborn child because of the approaching cutoff date for a late term abortion.  Victoria’s film chronicles a yearlong journey of learning about love, decision-making, and letting go, while midwife, Michelle cares for Rebecca and the rest of her family, who do not know the fate of their unborn baby.  The family decides to let nature run its course, cease further testing, and to have the baby naturally, who was expected to be born, breathe for a few minutes, and die once the umbilical cord was cut.

Victoria had no idea that her film would transform into the emotionally charged story that it became.  But she is grateful for the message it now powerfully delivers.  By telling Rebecca and Michelle’s story of being open and making choices against patriarchal medicine advice, the documentary brings awareness to and challenges the complexity of what it means to be “pro-choice.”  It reiterates that “pro-choice” does not necessarily mean pro-abortion; it’s about having the power to choose the best option for the individual’s body, family, and overall well-being.  Women deserve the right to have an abortion if they want one, but they are also entitled to the right to keep a baby that professionals may advise to terminate.  In a miraculous turn of events, Rebecca’s baby, Joey, survives.  She chose to go against hospital doctors’ advice and against all odds, the child lives.  Rebecca trusted her body to birth the child, despite his dire diagnosis, and now, nearly one year later, he is preparing for his first birthday party.

Victoria’s philosophy is that there are so many humble women in the world who have had amazing life experiences and no one knows about them; she wants to give voice to them, their stories, and the challenges they overcame.  Community artwork and film are the driving forces in her life, motivating her to consistently work towards social change and ending oppression.  Life is hard and if Victoria can help tell the stories of the women who have overcome difficult hurdles, in order to help other women find power and strength, then that’s good enough for her.

If you would like to help Victoria and her current project (you should!), she is fundraising to complete the film, titled “Into Loving Hands” by the late summer.  If you choose to donate, you may do so until April 2nd at www.igg.me/at/intolovinghands.  For more information about the movie, visit www.intolovinghandsmovie.com and to see more of Victoria’s awesome work, check out www.victoriakereszi.net!