Prison education programs, particularly those that provide college-level courses are important to everyone, not just the prisoners who participate in them. Governor Cuomo’s proposed initiative to fund – with state money – college programs in 10 prisons has sparked some very interesting dialogue surrounding this topic. Although it is looking like the program will not be written in the budget for this fiscal year, examining the way this issue has been talked about sheds enormous light on how our society views prisoners and why it is important for social justice folks to raise hell about this issue.

First off, it appears that most people very much support vocational and trade programs for prisoners, such as electrician or plumbing programs, but not college-level courses. This is made very clear in Rep. Tom Reed’s proposed “Kids Before Cons” Act (which was in response to Gov. Cuomo’s proposal), that would prohibit any Department of Justice or Department of Education funds to be used to fund college programs in state and federal systems. However, this act would leave vocational and trade programs untouched. This is a blatant example of the “deserving” and “undeserving” dichotomy. Prisoners (criminals) – who are mostly people of color I might add – only deserve vocational and trade programs. They should not have a college degree, especially if they do not have to pay for it. In a meritocracy like the United States, giving criminals a free college education when law-abiding citizens have to work hard and pay for that same education is the ultimate treason. People who break the law just do not deserve that kind of luxury. Especially when more than 60% of those in prison are men of color. 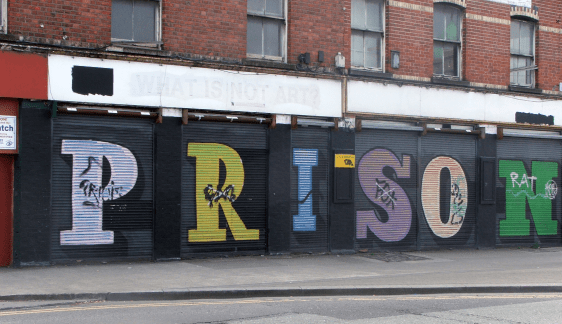 Felony disenfranchisement leaves 1 in 13 African Americans unable to vote. Thankfully in New York, those with criminal convictions can vote if they are on probation and once they are out of prison and off of parole supervision. Although it would be significant if all those with criminal convictions in NY had the right to vote, the Empire State is better off than states such as Florida, Kentucky, and Iowa that permanently disenfranchise those with felony convictions. That being said, I think it is fair to say that a college education could provide (and does provide, at least in my experience), a better understanding of how the world works, how government works, and offers new and inspiring perspectives on society and life. With that potential, people coming out of prison with a college education have more of an opportunity to become better assets to their communities, that are possibly already wrecked by the devastation of mass incarceration. Not only does having a college education push you forward in your potential to obtain a lasting career, but it also has the potential to make that person with a degree a role model for youth and gives that person a sense of worth and self-esteem that they might not have had before. That is not to say that people coming out of prison are not already assets to their communities or are role models.

And it is not to say that a person without a college education cannot be or are not role models or assets to their communities. However, to put it in numbers, Hudson Link for Higher Education has been providing college education in 5 NYS Prisons for 15 years, using private funds (of course). The three-year recidivism rate of the 168 graduates of Hudson Link released from prison has been less than 1%, compared to the NYS rate of 40%. This means that people being released from prison with college degrees are staying out of prison and creating stronger communities.

Going back to the “Kids Before Cons” Act, the discussion around college education programs in prison has created an interesting, and I would say unexpected, dialogue about family. In a newspaper article, Rep. Tom Reed who proposed the “Kids Before Cons” Act stated: “New Yorkers are faced with enough taxes and mandates – they do not need to worry about funding college for convicted criminals when they are trying to care for their own families.” What this act says is that Gov. Cuomo’s proposal is not good for “NY families”. However, Reed is speaking of a very specific NY family, leaving out families that would have a direct and possibly life-changing benefit from Gov. Cuomo’s proposed plan – the families and children of those incarcerated in NYS prisons. The Correctional Association (CA) of New York states that there are nearly 80,000 children who have a parent in a NY prison. Seventy-three percent of women and 58% of men incarcerated in NY are parents. A college education could literally lift a family out of poverty and further inspire children of incarcerated parents to believe that they are more than their circumstance. The influence that a college education for an incarcerated parent could have on their family in itself could begin the empowerment of entire communities. Imagine if all 2.2 million people in prisons and jails across the United States were released with some sort of college degree or even college courses under their belts. Wouldn’t that be a better society for all of our families? And what kind of society are “NY families” raising their children in, when in the very text of our laws, some people are depicted as deserving less than others?

College education programs in prison are important to everyone. That is why although it is unclear what is going to happen with Gov. Cuomo’s proposal, we need to fight and be loud in support of these programs. Even though college programs for prisoners is certainly not the direct answer and solution to mass incarceration, I cannot help but feel that it is a start.