In an effort to give Holding Our Own’s network members an opportunity to get to know each other just a little better, we will be spotlighting a couple of local feminists each month. We hope that this will help give you more opportunities to connect, collaborate and leverage your resources. Do you want to be next, or know of anyone you would like to see featured? Email hoo@holdingourownonline.org and we will set up an interview. We hope to have lots of participants! 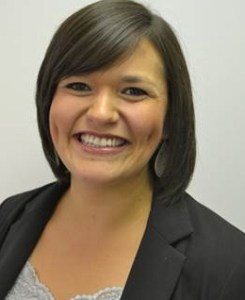 “What am I going to eat today?” It’s a simple question many people ask themselves daily. However, for many others, the question is not only what they will eat, but when or even if they will eat. Contrary to popular belief, food insecurity is a huge problem in the United States and Jessica Pino is a local feminist and activist working to change that.

Jessica, who also happens to be a member on the board of Holding Our Own, has been a nutrition program specialist at Hunger Solutions New York since 2011. At this organization, she is working to promote child nutrition programs, particularly school breakfast, which is one the most under utilized programs, as well as working on summer food and after school programs. Despite Jessica’s enormous impact in this area, it is just a fraction of the work she has done and places she has been.

Growing up in a bilingual household in a small town in the Glens Falls region of upstate New York, Jessica always defined herself differently from her peers. With a mother from the Albany area and a father from Peru, she was one of the only children who had a parent of color, making her one of the only women of color in her little school, where she graduated with just 35 people.

Following high school, Jessica continued her education at Hartwick College in Oneonta, New York, a small liberal arts school, where she not only received her Bachelor’s degree in Sociology and Spanish, but was also given the opportunity to explore the world. Her parents were both Catholic missionaries in Peru, so because of the environment in which they raised Jessica, she felt brave enough to go to Chiapas, Mexico- a place of conflict- during her freshman year. She spent a great deal of time in Latin America throughout her college career, working on human rights issues with the Women’s Union Cooperative, but it was her time in Chiapas that ignited a flame within her; human rights were being violated not even 100 miles from the United States border and that was enough to sustain Jessica’s motivation to empower people throughout her studies in college and beyond.

During this time she focused her energy on this culture of women’s indigenous rights, particularly their right to bear children, which challenged her native country’s definition of birth control. The women in Chiapas wanted the right to choose to have a child and the right to be able to raise them in a healthy environment and afford them the food and care they need. That was the birth control they wanted, and seeing that these women’s voices were not being heard, and their needs weren’t being met, Jessica was not going to stop her non-profit work any time soon. An important aspect of this work for her was creating economic sustainability for the places she visited. She did not want her time in these countries to be a so-called “one night stand” of volunteer service. She questioned how to do grassroots work as an outsider, in a way that is meaningful and not overriding local people’s agendas, yet still doing it in a thoughtful way, where once she left, there was a lasting impact. She challenged herself and others with these questions in Mexico, Peru, Bolivia, and Puerto Rico. Her radical side thrived, and Jessica felt more drive than ever to recognize and to correct the human rights violations, poverty, and food insecurity in the world’s communities.

However, after graduating from college, a time full of rich experiences, Jessica was stuck without a job at the height of the economic recession, and living with her parents with huge college debt. But this setback was a blessing in disguise. During this misery of being unable to find a job, she recognized that she whole-heartedly wanted to work in her surrounding communities on the real issues that everyone is facing. Thus, Jessica received her Master’s of Social Work from he University at Albany, where she started at Hunger Solutions as an intern. Four years later, Jessica is a strong member of the statewide anti-hunger organization, working to end hunger through promoting federal nutrition programs and full participation in them.

One of the largest programs they work on is SNAP, the Supplemental Nutrition Assistance Program, or what used to be known as food stamps. They also have a statewide SNAP outreach team that aids people in applying to these programs by accompanying them to the Department of Social Services and helping to fill out documentation. It is the largest SNAP outreach program in the entire country, and rightfully so, Hunger Solutions and its employees take great pride in that.

Now, Jessica primarily promotes “Breakfast in the Classroom.” She talks to schools about the practicality of breakfast and the importance of a healthy meal in the morning. What Jessica asks of schools is to make breakfast a part of the school day so that is incorporated into the school day and routine, and not interrupting or taking away from children’s personal time in the morning. So far, it’s been successful. Locally, Schenectady does it district wide, and Albany does it in some schools. However, schools are doing it everywhere statewide and across the country. Besides the obvious benefits of the program, Jessica stresses the importance of access. Breakfast is so under utilized in schools because of the time of day it is served, because of the stigma that is around it. The children who need breakfast in the morning are the “poor kids,” and at any age, youths and their peers understand and feel this. So by including Breakfast in the Classroom in the school schedule, it is creating a new norm; all kids are eating, no one is mortified by being singled out or sent alone to the cafeteria, and the stigma is gone.

These programs are designed to safeguard low-income families so that if a child’s family falls below a certain percentage of poverty, then they qualify for free meals at school. There are additional brackets where one can receive a reduced price. However, full price is still relatively inexpensive, around $1.25. However, Hunger Solutions works strictly on food insecurity, not poverty. Because 95% of their funding comes from the state, they must be careful with their politics at work. Yet, working solely on food insecurity is a strength because it is so focused. Hunger Solutions (despite the name) does not view these programs as the solution to hunger, but as a way to address these issues. 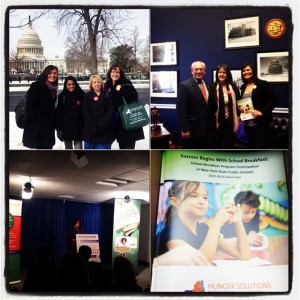 By framing hunger differently, from a human rights perspective specifically, rather than in a health context or with kids in an education context, they are changing how people attempt to solve it.
Jessica also recently released a school breakfast report, a statewide report on how public schools are doing on school breakfast. Many school officials don’t realize they are only feeding a fraction of their students, and it’s because hunger looks different today, and Jessica is working to bring awareness to that and feeding the kids who need to be fed. But because schools have budgets, and Jessica is representing yet another source asking for money, she figure out how she can win their support. So in addition to reiterating how it will improve students’ health, she must stress how an extra meal impacts the classroom, attendance, testing, and academics overall.

It is evident that Jessica lives a busy life, and she does so much that she, herself, cannot describe her “typical” day. The common thread, though, is her constant exercise of her feminist beliefs. But when it comes to defining feminism, Jessica is almost at a loss for words. She has always identified herself as a feminist, yet she struggles to describe it. She finds it easier to explain the kind of feminist she isn’t.

“There is so much power in saying what everyone should and shouldn’t do, what they should and shouldn’t be,” she says. “I think feminism is about constantly questioning power. It’s about constantly questioning power relationships- between yourself, between other people, between entities, between organizations, between the government- just the constant awareness of power.”

Jessica especially acknowledges her own power. “The fact that you’re even interviewing me, that’s huge!” Because she has always seen herself on the side of the oppressed, the side of the people who don’t have a voice, she has to be careful. She has been given the opportunity to have a voice, and to be heard, and often asks herself what that means. She must be deliberate and carefully choose every word she says and action she makes, otherwise she can easily become the oppressor. Humility is a huge part of her feminism. Understanding that no individual is the expert on anyone else’s life is tremendously important. Without recognizing that there is always another person, with another perspective, with a greater understanding, who is more impacted, based solely on his or her position, then even the greatest work is for naught. But the greatest aspect of feminism, for Jessica, is that anyone can define it however he or she would like, and it’s true as long as the individual is living it and doing it. “It’s always trying to find your own path,” she says. Jessica has not only found her own path, but she has created her very own.