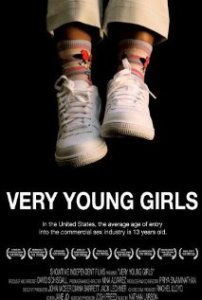 Sponsored by Holding Our Own,  NYS Coalition Against Sexual Assault and Patty’s Place

The screening will be followed by a facilitated discussion.
Very Young Girls is an expose of human trafficking that follows thirteen and fourteen year old American girls as they are seduced, abused, and sold on New York’s streets by pimps, and treated as adult criminals by police. The film follows the barely-adolescent girls in real time, using vérité and intimate interviews with them as they are first lured on to the streets and the dire events which follow. The film also uses startling footage shot by the brazen pimps themselves giving a rare glimpse into how the cycle of street life begins for many women. The film identifies hope for these girls in the organization GEMS (Girls Education and Mentoring Services), a recovery center founded and run by Rachel Lloyd, herself a survivor of sexual exploitation. She and her staff are heroic and relentless in their mission to help girls sent by the court or found on the street. Given a chance to piece their lives back together, some will live on the edge of two different worlds consistently battling the force that will suck them back into the underground. Very Young Girls’ unprecedented access to girls and pimps will change the way law enforcement, the media, and society as a whole look at sexual exploitation, street prostitution and human trafficking that is happening right in our own backyard.