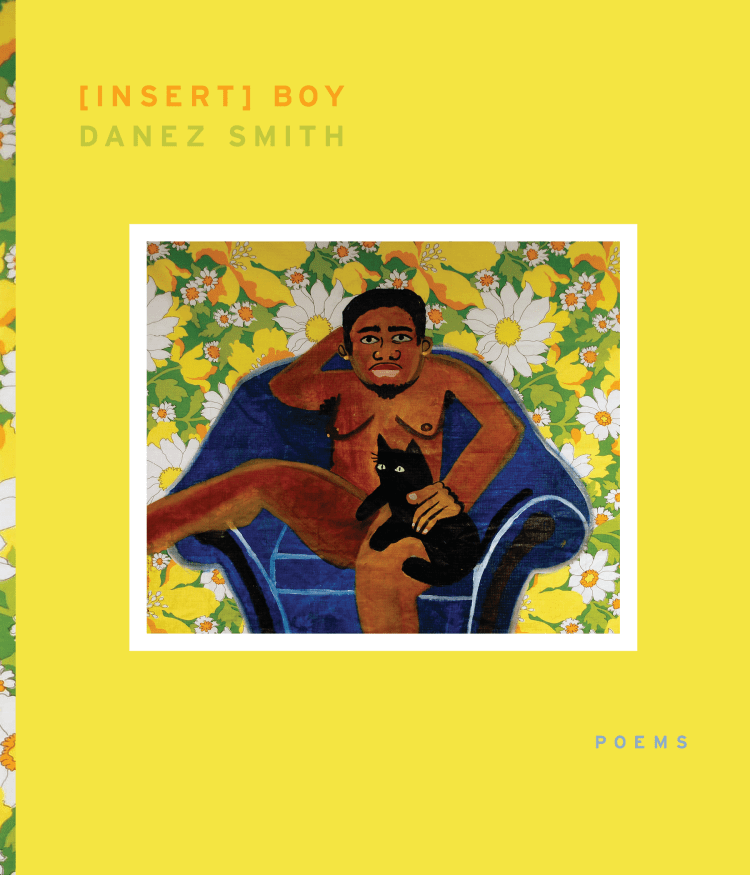 & on the eighth day, God said let there be fierce & that’s the story about the first snap, the hand’s humble attempt at thunder, a small sky troubled by attitude // & on the ninth day, God said Bitch, werk & Adam learned to duck walk, dip, pose, death drop, Eve became the fruit herself, stared lion’s in the eye & dared to bite // & on the tenth day, God wore a blood red sequin body suit, dropped it low, named it Sunset // & on the eleventh day God said guuuurrrrrl & trees leaned in for gossip, water went wild for the tea, & the airtight with shade // & on the twelfth day, Jesus wept at the mirror, mourning the day his sons would shame his sons for walking a daughter’s stride, for the way his children would learn to hate the kids // & on the thirteenth day, God barely moved, he laid around dreaming of glitter; pleased with the shine, sad so many of his children would come home covered in it, parades canceled due to rain of fist & insults & rope & bullets // & on the fourteenth day God just didn’t know what to do with himself

“today, being Black and gay is an armor, a gospel i love dearly. i love Black queers. i love who and how we are. it’s taught me how to love; how it can surprise you with its leaps and failures.”

~ both poem and quote by Danez Smith 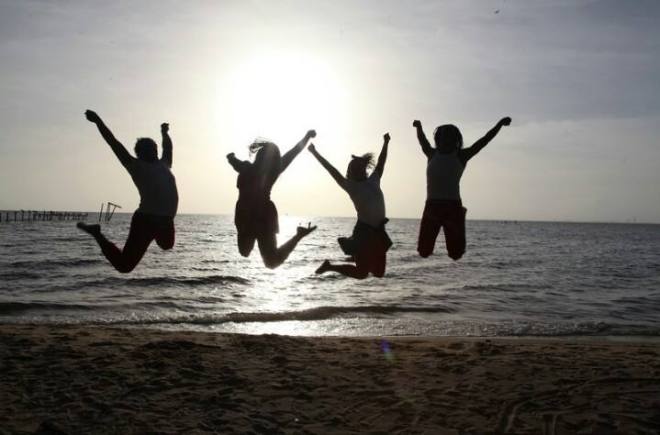 fb friend: i agree…but i fear many become trans cuz of homophobia…i validate all. but i wonder…and the only reason i wonder is cuz of lesbian feminist space. we need it.  i will say that i notice, Black transwomen, seem to be feminist and white ones are MRAs (male rights activists)…wish we were all more like Leslie…this particular poet is just beautiful.  maybe my feminism has taken a wrong love turn…i feel a poem.

i need help on this issue. don’t give up on me yet!

headzup that i don’t believe that it is the responsibility of oppressed folx to educate those of privilege/dominant culture about the lived realities of oppressed folx. i believe those genuinely interested should initiate that education on their own with the wealth of resources available.  oppressed folx have enough to deal with in organizing and advancing liberation for our survival — but for you i will make this exception.  i’ll try to convey my evolving perspective and “not give up on you yet” but i’m gonna give it to you straight/no chaser:

your feminism has taken a turn that i could never fall in love with, unfortunately. a) not only does it not incorporate ALL trans persons, including genderqueer, gender non-conforming, two spirit, intersex, et cetera, et cetera, but b) trans folx, especially those of color, are catching far too much very real hell for the expressions of their inner journeys to be regarded as an aberration chalked up to oppression. this is offensive, negates their power of self determination, and reinforces the already misogynistic and heterosexist gender binary.

just as my fellow queer femmes, trans and cis, are not simply an aberration of misogyny. just as all lesbian/bi/queer women aren’t so because they “haven’t slept with the right man” or “had to have been abused” or as a political stance to misogyny.  re: the latter two examples, no doubt there are those of us who have woefully experienced gendered brutality (of course, any is too many) and no doubt that some women DO see lesbian identity as the sole legitimate expression of feminism — altho that perspective may be aging out from its 1970s/80s heyday due to the dawning realization of *intersectionality — but even those folx, those who are not asexual that is, possess very real attractions. very real desires. very real identities (and this includes asexuals).  it is offensive to negate their agency, and again reinforces the misogynistic and heterosexist gender binary. in my view, it is offensive to invalidate on its face the self determination of any oppressed communities.  besides, we are all so beautifully diverse and always have been.

[* = as you may recall, the Combahee River Collective was founded by Black feminists partially out of frustration with white feminists who demanded Black feminist/queer sistas leave the bruvs behind in favor of separatist (and racist) so-called feminist communities and spaces.]

it is sloppily simplistic, dangerous, and risks trust to make presumptions that deny the complexity of any of our souls, collectively or individually. even, or especially, when it comes to how we determine our personhood (e.g., gender) within OR outside of socialized norms. in this case, it denies the history of two spirit existence in indigenous communities as well as those of gender diversity in other communities of color transnationally.  their embraced and elevated roles in communities (often as spiritual leaders) had (and may still have) a non-eurocentric perspective on gender roles and relationships. plus, it diminishes and dismisses any folx who arrive at an expression of identity that “feels good, feels right” to them — one that may incorporate such great risk. an expression that anecdotally may have been arrived at in childhood. an expression that is no more and no less subject to conditions of oppression than any other identity. are we really in a post-liberation context where we can say for certain which gender identities (if that would even be a classification) are legitimate? HELL NO.

i had to express solidarity with my trans kin just this week in a “womanist” facebook group after posting an article about Lamia Beard’s gender identity being disrespectfully erased by the media following her being horrendously murdered [http://www.alternet.org/civil-liberties/transgender-woman-murdered-media-refuses-honor-her-gender-identity].  K. E. M. left a comment stating that while she “felt sorrow for this person,” she “still did not consider them to be a woman.” a one-liner. just like that.  sprayed shit and left.  >:(

this was my response:

“well then, thank goodness their identity and autonomy don’t rely on your fucking consideration. unfortunately for their safety, the climate of violence does rely on your attitude (perhaps the VERY attitude that has led to the murders and suicides of Lamia and other trans/gender non-conforming folk).  with your lack of solidarity and respect, your sorrow is meaningless.  it is meaningless to the truth of Lamia Beard & ALLA her SISTERS and dangerous to those of us who actually give a shit about the lives of ALL women. TRANS women — like Lamia. women OF COLOR — like Lamia. neurodiverse women. female sex workers. gender non-conforming women. poor women. intersex women. queer women. women with disabilities. women across borders.  ALL women.

“but hey, we have YOU to police the binary!  sooo…  does a piercing still make me a cis woman? a tattoo? breast surgery? hysterectomy? what alteration determines or jeopardizes my womanhood? what if i’m intersex? clearly my self-determination, my IDENTITY, is not the measure.

‘destroying the self esteem of my sisters through the horrific language chosen to describe our experience. our safety isn’t cosmetic.’

‘standing by is an act of VIOLENCE. you are supporting the genocide of Black trans women.’

~ both quotes by Black Trans Media re: media erasures of trans people’s autonomy even in death

below is the response to K.E.M.’s comment by one of the group’s moderators:

“not cool. such a comment does not build solidarity or trust amongst women — it only divides and separates — what kind of feminism is that? that’s not what we gather here for. death is not a time for a political agenda to negate or erase someone’s Truth, or better yet, death IS the time for a ever deeper show of political unity, a time to express and show solidarity in our collective interest of humanity. ‘i’m sorry but [insert erasure of Truth commentary here]…’ sounds like liberal-speak for outwardly sounding nice and humane to get the populist votes with apologies and good sounding rhetoric all the while holding a boot firm on the neck — and not willing to do a damn thing about that boot. perhaps the problem is we have not outlined more explicitly in the About Us section what solidarity and trust and DECOLONIZING feminism looks like and requires our labor in. we likely have many in the group who are looking for greater guidance and support in how to better stand in solidarity with all women, of the globe, and how to decolonize the eurocentricism from our ideas and political work of feminism and the myriad of oppressive ideology born from eurocentricism…

“our work is only beginning.”

me: so that’s that. no chaser.

fb friend: I’m taking it all in. I agree you shouldn’t have to teach me about my status as oppressor in this. And my grief is absolutely meaningless when people are trying to live free. 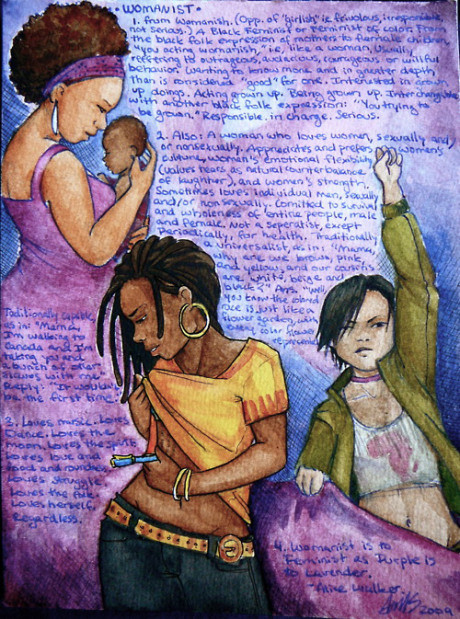 Alice Walker’s definition of a WOMANIST from ‘In Search of Our Mothers’ Gardens: Womanist Prose’ (1983):
1. From womanish. (Opp. of “girlish,” i.e. frivolous, irresponsible, not serious.) A Black feminist or feminist of color. From the Black folk expression of mothers to female children, “you acting womanish,” i.e., like a woman. Usually referring to outrageous, audacious, courageous or willful behavior. Wanting to know more and in greater depth than is considered “good” for one. Interested in grown up doings. Acting grown up. Being grown up. Interchangeable with another Black folk expression: “You trying to be grown.” Responsible. In charge. Serious.
2. Also: A woman who loves other women, sexually and/or nonsexually. Appreciates and prefers women’s culture, women’s emotional flexibility (values tears as natural counterbalance of laughter), and women’s strength. Sometimes loves individual men, sexually and/or nonsexually. Committed to survival and wholeness of entire people, male and female. Not a separatist, except periodically, for health. Traditionally a universalist, as in: “Mama, why are we brown, pink, and yellow, and our cousins are white, beige, and black?” Ans. “Well, you know the colored race is just like a flower garden, with every color flower represented.” Traditionally capable, as in: “Mama, I’m walking to Canada and I’m taking you and a bunch of other slaves with me.” Reply: “It wouldn’t be the first time.”
3. Loves music. Loves dance. Loves the moon. Loves the Spirit. Loves love and food and roundness. Loves struggle. Loves the Folk. Loves herself. Regardless.
4. Womanist is to feminist as purple is to lavender